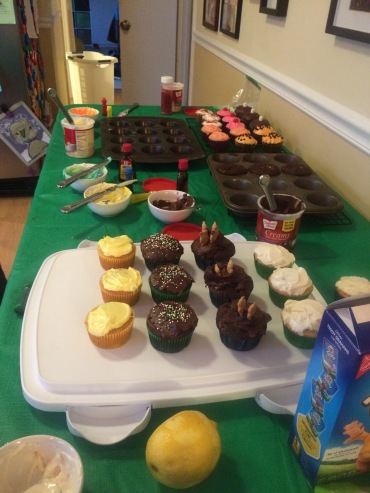 For my younger son’s seventh birthday we had an experimental bake-off as one of his presents.  He is always coming up with flavor combinations he wants to try, be it a lemon peanut butter cup (which was actually amazing) to an apple orange soymilk smoothie (a lot less amazing). He has wanted to experiment with cupcake flavors forever, so when he got home from school we had a whole table of ingredients and sprinkles and frosting ready to mess around with. We whipped up basic vanilla and chocolate batter and set out all of our extracts (vanilla, almond, peppermint, orange, lemon, coconut and anise) all of the fruit in the house, nuts and candies and toffee bits and chocolate chips and marshmallows and food coloring and Teddy Grahams.

He was beside himself. The four of us, him, me, my husband and my older son would make three different experimental flavors each, and we started plotting and planning and dicing and mixing. In no particular order we ended up with…

The cupcake production was going full tilt…until it came grinding to a halt. In the midst of us all being excited about trying our cupcakes out for dessert that night, my husband casually mentioned that we could have friends and family test them out the next day at the huge family birthday in our little guy’s honor. That stopped him dead in his tracks. He suddenly refused to do any more – even though he had only come up with two of his three designs. Even though he had been so bouncy before. Even though the only reason we had to come up with this idea was that we knew it would make him extravagantly happy. He stopped.

We should have known. Our seven-year-old is terrified of other people’s reactions to his creative work. He has been known to throw Lego creations when they don’t work out, or to literally not move once he feels he is being watched too closely. He dances joyfully at home and messes around with a guitar, but the thought of taking lessons for either paralyzes his fun.

He sat angry on the couch as first I tried to coax out of him what was wrong, then his father took a turn. Eventually my husband was able to get him to admit that he was worried other people might hate his cupcakes. We first reassured him that people would love them, and if they didn’t it would be okay. When that was met with a skeptic scowl, we then reassured him that only our little family of four would ever taste them if that would make him happiest. My husband got him to design his last cupcake-the classic chocolate one with the elaborate topping.

He is my child, for sure.

I am the one who procrastinated on writing papers until the last moment because if they turned out badly I could blame it on the time crunch. I am the one who was given an opportunity to write the introduction to an online curriculum series in college and turned it down because it made me too nervous. I am the one who decided I would rather be “well-rounded” than put all my energy into ballet. I am the one who got solos, but would then show up to voice lessons and even competitions woefully underprepared. I am the one who refused to let anyone coach me on my monologue audition I would perform just once for over twenty colleges’ theater departments.

Sometimes my fears honed my actual work into a fine point – my almost late papers taught me how to get an “A” even with limited time by using my (not-often-used) laser focus, my monologue got me admission into ten different theater departments. But then I kept shooting myself in the foot. I didn’t go into theater for fear of a lifetime of rejections. I don’t dance or sing anymore except in my own kitchen. I still write though, and I am trying for my youngest to show him that putting your creative work out there in the world is incredibly difficult, especially for him and for me, but that it really is the only way to be happy. It is the only way to be true to yourself, to be honest with who you are and what you bring to the world – putting your work out there for other people to see.

The beauty of living in a land with twelve kinds of cupcake is that you haven’t put all your hopes and dreams into just one cupcake. When you make just one, you are scared of your aunt who doesn’t care for chocolate, worried about the cousin who is allergic to nuts, terrified that another cousin will think it is too boring or that your grandpa with think it too crazy or that your grandma will say she likes it even if she really doesn’t.  When you have twelve different kinds of cupcakes, twelve experiments of flavor and texture and color it is okay that the jelly beans fell out of the bottom of one but left a delicate delicious flavor. It is okay that the peanut butter banana was too dense, it’s a great surprise that lemon and banana together is light and airy. It is more than okay to make a classic chocolate cupcake perfectly simple and beautiful decorated.

I am trying to take my own lesson from this. Right now I am grateful I am letting myself send so many cupcakes into the world, because I am less worried about each one being perfect.

I have, out there in submission-land and in no particular order…

Eventually, in the sixth hour of his family party, our youngest let other people try out his cupcakes, once the big cake had been served, once the numbers of guests dwindled and he felt happy and content and comfortable with sharing his creativity. I think it went well, and I hope both he and I remember that while sharing can be scary, there are tricks to make it less so. And, ultimately, even if you are temporarily paralyzed with fear, moving forward anyways is worth it.

2 thoughts on “In a Land of Twelve Kinds of Cupcakes…”