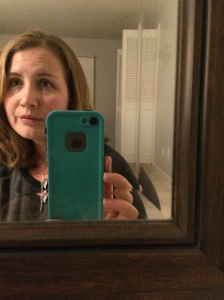 There once was a boy who had a crush on me, in 1995 or 1996, who said I looked like Jennifer Aniston. It was right around the time Ross and Rachel got together, and it was sweet and flattering and totally delusional. I have the same color eyes as Jennifer. I had her famous hair cut, and by nature my hair had the right color to it. I let my sixteen-year-old self be complimented, let myself be compared to a star and feel puffed up for a bit. I knew I would have been happier to be thought of as attractive on my own terms, but it was better than being heckled for looking mannish in the oversized t-shirts and flannel I had chosen in 1994 or 1995. Once in a while I would watch Friends and Rachel might make a face I recognized as my own, usually when she pouted or pined away or tripped up, when her face was scrunched or sad or embarrassed.

There was a drama teacher in 1996 or 1997 who was about to walk past me during a rehearsal for a musical. I was sitting, reading as I always did. My “Rachel” layers had mostly grown out and my fear that I would be taken for a boy had as well. I was wearing a larger t-shirt, biting on my nails as I concentrated on my book. He paused in front of me and said, “I have noticed something about you. You aren’t vain. The good actresses aren’t. They can’t be,” and he walked on. And I let my seventeen-year-old self be complimented and compared to a star. And some vanity crept back in with a compliment about its absence. And I let myself feel puffed up for a bit.

Sometime in 2014 or 2015, a movie named Cake was released starring Jennifer Aniston. Much has been made of how she has physically transformed for the role. She goes without makeup, her hair is greasy, her clothes dowdy, her visage twisted. In it her character is unpleasant, spiritually somewhat ugly and in constant physical pain. Or so I have read. Some people are applauding the way she abandoned her clean-cut good looks for the role, that it is a credit to her acting talent and craft. Some people aren’t as glowing in the reviews of her acting skills, but still credit her bravery in allowing her image to alter. Good actresses cannot be vain. The worst of the gossip rags exclaim how glad they are that she shows up on the red carpet as her old attractive self.

I have not seen the movie. I have seen stills from the set of the movie. I still look like Jennifer Aniston when her face is scrunched and sad and embarrassed. I still look like Jennifer Aniston, but now only when she is greasy, and dowdy and acting as if she is a woman with a chronic pain condition. The difference now is that I am a woman with a chronic pain condition, who on some days cannot help but leave the house when I am still in horrible sweatpants, matted hair and bare face. When I cannot help but grimace and cry instead of smiling politely.

Seeing Jennifer Aniston this way, this mirror of what I sometimes look like now, was ego-crushing. In this movie, she does look awful. Purposefully so, but still. So I can look pretty awful, too. Even if I don’t witness it myself, because many days I don’t even look in a real mirror, it is still there. I cried some. I growled that Jennifer Aniston wasn’t really sick, just pretending, but I was. So I might always look this way. Obsessively swiping through images, searching out all the horrible things said about Aniston’s appearance, cataloguing the disparaging adjectives, showing the pictures to my husband against his will: the tailspin I let this put me in was ugly.

Despite the compliment from my teacher, I absolutely can be vain. I don’t think I can get around that. I can give myself a break and say, “There will be some days I feel like shit. And sometimes that will show. And that is okay.”

And… despite being flattered by a teenaged boy when I was a teenaged girl, I can still decide that he was wrong, and that I look like no one but me. Mercifully I have the power to release myself from any comparisons, good or bad.

“There was this incredible crashing noise, like a huge stack of heavy boxes falling over. I went running around the house making sure no one was crushed and never found what it was. Then it happened again that same night. Again, nothing had actually fallen over.” My brother is one of the first people I tell strange phenomena to, because he is the likeliest of all my family and friends to explore all the possibilities with me.

“Maybe a poltergeist?” I actually sound a bit hopeful.

“But it is!” I can sense my brother raising an eyebrow over the phone, “Poltergeists, well according to Wikipedia, tend to be manifestations of one person’s stress. So, I just need to relax. If it’s a ghost or something then I have no control over bumps in the night. This way, I do!”

“Yeah, still not a comforting thought.”

I would rather have a poltergeist in my house than a ghost. My brother would rather a ghost than a poltergeist. My oldest son, when asked if he was afraid of ghosts one Halloween, furrowed his brow in confusion. “Ghosts are just dead people,” he said. Seeing as he is generally not afraid of live people, this makes sense. But it doesn’t.

Fears are so idiosyncratic. I used to believe that every fear someone had made sense, or had a contextual backstory that explained it away. I am scared of crossing train tracks. I live in the suburbs of Chicago and there are a whole bunch of Metra stations and tracks everywhere. I had heard stories of people dying at crossings. When I was a child in the backseat of a mini-van, I had no control over the speed of our car or when I could cross to safety. When I have had to walk over tracks, I am painfully aware of how slow and clumsy I am.

I am scared of large dogs because for a few summers I worked as a mail carrier. A huge German Shepard that roamed an otherwise empty house day in and day out lunged for me and ripped through a screen next to my head.

I still have nightmares about velociraptors because of Jurassic Park.

But I am scared of heights with no clear reason. Arriving late for almost anything starts a low-level anxiety pit in my stomach that can grow quickly to fill my chest cavity. I can swim, but drowning fills my nightmares.

I’ve come to realize that some fears have no clear context, that maybe the quirks of what we fear are largely inborn. Just like our favorite and least favorite foods are decided by a mysterious combination of the chemicals in our brains and the way we’ve been exposed to snacks, maybe our fears work the same way. Some make sense and others don’t.

Take my two sons. They are only two and a half years apart. Almost all of their formative life experiences they have had so far in this world have been together. Raised by the same people, taken on the same vacations, enrolled in the same school, exposed to the same movies and TV shows and video games, they probably have more similarities than differences. But…

My oldest is afraid of spiders and heights.

My youngest will be going to a camp this summer mostly to see spiders, and climbs to the top of every playground.

My oldest went water tubing at the age of six and stayed out behind the pontoon boat as long as we would let him.

My youngest, sitting on the boat, absolutely refused. But when he saw teenagers jumping off cliffs into the lake he asked if he could, too. At four.

At the very least it fascinates me to know that for almost every fear we have, rational or not, there is probably a counterpoint. For every fear that has us paralyzed, there is someone who is just amazed or thrilled by it. And the things we take for granted as manageable (I am not afraid of dentists or doctors or public speaking, for example) could be terribly daunting for someone else.

I have always been terrified of the idea that aliens may exist. I want to watch shows about it, but find myself chickening out at the last moment. At any given time there is probably an episode of Ancient Aliens waiting for me in the DVR, biding its time until I am brave enough to conquer it.

My oldest, at eight, has commented on that particular fear of mine.

“I am much more worried that there are no aliens. That will really are alone in the universe. That scares me. We’re the only ones alive in the whole universe? Totally by ourselves?”

I consider this for just a second. “But, what if they are dangerous or evil aliens?” I ask because that is the only possibility I can imagine. “If those are the only creatures who are out there, that doesn’t seem very comforting.”

“But,” he looks at me with that furrowed brow again, “it means someone else is out there. It is.”