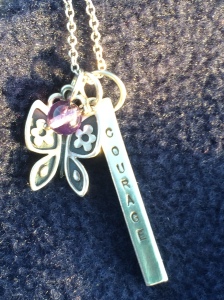 May 12th is Fibromyalgia Awareness Day, and FibroDaily.com is posting stories and artwork all throughout May bringing awareness to what people with fibromyalgia go through.

The link where you can find this piece (and all the other fibromyalgia stories throughout May) is http://fibrodaily.com/

A conversation with children at 7:00 AM. It is a chilly winter morning, and two young boys ages 8 and 5 beginning interrogating their harried mother.

Youngest: Don’t we have any dreidels?

Youngest (cries as if heart is broken)

Mother: What on earth???

Youngest: I want to collect dreidels.

Oldest: So I just made up this drum set. How long did Fleetwood Mac practice before they were rock stars?

Mother: I…huh…what? Do you mean Mick Fleetwood? I don’t know, what did they say on the show?

Mother: (switching attention rapidly between one child and the next) Ok, kiddo, we just don’t have dreidels. It’s not the end of the world, sweetie, really it’s not.

I have to be careful what sorts of TV shows I watch with my kids. It is not about violence, or sex, or even foul language. The above transcript comes from a morning where my boys watched a recorded episode of CBS Sunday Morning with me. This episode featured interviews with Mick Fleetwood and an older gentleman who owns the world’s largest collection of dreidels. Other episodes convinced the boys that they wanted to sculpt huge sandstone caves, create street art, start a bakery, and become comic book authors. Some days I am not up for how excited the boys are.

Mother: (just too tired to think straight) That is IT! We cannot do everything! These people, the people on these shows spend their whole lifetimes doing what they do-we CANNOT replicate what they do in the space of a morning. We are not going to pout about it either. Just, everybody CHILL OUT!

But, most days, I am able to appreciate the way a segment on a show can ignite their imaginations. And I am a little jealous. I have found them designing huge pumpkin sculptures (with trick-or-treat buckets and stuffed animals) after watching Halloween Wars. They’ve made River Monsters out of Legos and blocks and boats out of kitchen chairs. We made a turkey-shaped sugar cookie at Christmas because a contestant had on Holiday Baking Championship. Every room of the first floor was commandeered recently for a live-action game of Boom Beach that went on for two hours.

Come to think of it, it really isn’t just TV shows. Sometimes it’s video games, apps, zoos, restaurants, songs, books. Everything can become a game, or a new dream to pursue, or a book they need to write.

One of my favorite days was right after we had been to The Museum of Science and Industry. We had seen the recovered submarine U-505 there. The next day they decided to play Battleship, which seemed reasonable as we’ve had that board game forever. When I came into the playroom, they had set up a fortress wall that divided the whole room in half. Homemade boats studded the sea of carpet. They threw stuffed animals at each other to sink the other person’s makeshift navy. And once a boat was sunk (they assured me no one on board was hurt) the boats were hauled away to be “museumed”.

I miss childhood and the way you can run off with an idea as soon as it pops into your brain. I get tired of having to postpone a project for dirty dishes, e-mails to the boys’ teachers and calls to refill prescriptions. I’m tired of waiting weeks and weeks between inspiration and execution. I’m frustrated with rainy days and budgets and tax appointments and laundry, but I suppose most adults are. I try not to let my jealousy peek out too often, because I am absolutely glad that this is something the boys can have, that I can give them now. As adults, as far as I can tell from myself and most other adults I know, they’ll still get a million ideas but they will have less time to actually do anything with them.

This post, alone, has been a nebulous idea that has floated around in my brain for at least a year and a half. And I have had a stolen hour Monday and a half hour this morning to get anything that made any sense written down. And that was only available because the boys saw a YouTube clip of a Hot Wheels track in a bathtub that they wanted, on Monday night, to try for themselves.

The games and toys that my two boys play with most often all have one thing in common. They all involve a huge cast of characters who must do battle in one form or another. Whether in video games like Skylanders or Super Smash Brothers, or as tangible action figures from Lego’s Hero Factory, or as spinning tops called Bey Blades or in their huge binders full of Pokémon cards, my children know each and every one of these competitors and how they perform in competition.

Do you by any chance know who Pop Fizz, Ninjini and Eye-Brawl are? How about Preston Stormer, Ogrum or Von Nebula? Charizard, Pidgeot or Gangar? I kind of know who they are, but my eight-year-old and my five-year-old could tell you exactly how they attack, who they attack, how much health and stamina they have and what are their main weaknesses. And there are hundreds more that they can describe in such detail. When they give me lists for Christmas or their birthdays, it becomes a long string of gibberish to my ears as they rattle off the characters they still need. I nod as if I understand. A lot. The once-in-a-blue-moon occasion that I remember some of these details leads them to believe I really am paying attention. Sometimes, sort of.

I didn’t play these games as a girl. I tried to decide if that was because I was a girl. I had traditionally feminine, gendered toys I loved: baby dolls, dress up clothes and a pretend kitchen. But I also had many that were not specifically “just” for girls: balls, bats, musical instruments, puppets, paints, roller skates, bikes, a microscope and even Pipeworks (a set of PVC pipes you joined together to make forts). I look at the playtime choices I made among the choices that were given, and I see that I practically never, ever chose something competitive. There was almost never a winner or a loser, no one was ever glorious in victory or saddened by defeat. That wasn’t a part of my play, or of my imaginative world. I anticipated my baby doll’s needs, I squished play-doh, I made up dance recitals in the living room and pretended to be trapped on a desert island in a version of Survivorman meets playing house. I looked at leaves pressed between slides. I made up restaurant menus. Fighting, battling and competition weren’t there.

Competition, and the desire to win at all costs, was considered a scourge as I grew up. Perhaps it was reactionary to the 80’s corporate culture, and a byproduct of the 90’s focus on diversity and inclusiveness. Maybe I had the message reinforced for me in church and school and home that caretaking, cooperation and empathy were far more valuable traits to cultivate. And maybe those traits were emphasized more strongly because I was a girl. And maybe, because I definitely wanted to be seen as a girl, I took to it. Or maybe those qualities were what I was naturally good at, anyways.

I look with curiosity at my children’s obsession with competition games. I am trying to parse out whether there is a problem with this play, because it looks so different with my own. The bottom line: I don’t think there is.

There are gendered expectations put on boys that they will have to engage in competitive activities. There are biologists who are fairly certain that competitive activities go hand in hand with testosterone. There are plenty of men and women I know who (gasp!) actually enjoy competition through sports and games and career-building. While I’m sure I could cite many examples of competitive spirit that went far, far over the line, I believe that the problem arises when it is taken to an extreme.

So, my boys are gearing up to be competitive creatures and to enjoy it. What lessons about competition are my kids taking away from Pokémon cards, specifically?

They are exposed to the idea that every competitor has unique skill sets. No one character is identical or has identical attacks. The diversity of successful competitors, from the cute and cuddly Pikachu to the enormous Mammalswine, gives credence to the idea that there is not just one successful archetype. Success, even in a narrowly defined arena, can look very different.

They are also familiar with the concept that every player has specific weaknesses. These weaknesses may cause them to take on more damage in a fight, if they are attacked in their vulnerabilities. However, everyone has a weakness. There is incentive to carefully choose whether to exploit that weakness for personal gain or not. The boys know that they could be exploited themselves. They know, too, that their weakness is normal and not necessarily of harbinger of defeat.

They watch DVDs of Pokémon exploits where battles are ethically constrained. The Pokémon practice their skills to improve. The trainers must acknowledge the feelings, health and well-being of their fighting Pokémon. The Pokémon themselves enjoy pushing themselves to learn a new move, but know when to rest. Wins and losses are accepted with grace.

And this is similar in all these competitive games they play: the diversity of skills and weaknesses, the need to rest and recover between matches, the impulse to improve, the good sportsmanship of winning or losing with integrity. In a world where (hopefully) healthy competition will strongly shape the lives of my two boys, I am happy they have found fun ways to learn how to navigate that world