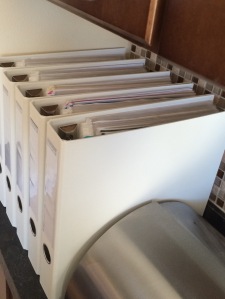 I seemed to have a difficult time making up a Christmas list this year. I had requested a couple of books (Humans of New York and one with close-up snowflake photography by Kenneth Libbrecht and Patricia Rasmussen) and nice white binders for my recipe collection (I know you are jealous! But, seriously, I love them). I remembered that my one pepper mill was broken, and there was a small charm I wanted. But beyond that, I didn’t have a grand wish list, which was beginning to annoy friends and family.

I’ve done a better job, I think, of letting myself get the inexpensive things that either I need or that would make me happy throughout the year. The cheap extra pair of sunglasses I keep in the car or my purse, so if I’m foggy and light sensitive I do not break down sobbing over misplacing the only pair I have. One extra pair of jeans, so that if laundry day is late I’m not faced with only having a dirty or chalk-covered pants to wear. A song I like downloaded on a whim. A treat purchased because I would like a treat. I don’t have the same backlog of needs or wants that I used to, and I hope do not take that for granted. I am very lucky.

The other issue is, really, that most things I want cannot be bought or given. I really am not trying to be coy or philosophical here, expounding on the important things money can’t buy. In totally literal terms, I want dairy-free candy. Dairy-free candy is really hard to come by.

This note was even in my stocking at my parents’ house: 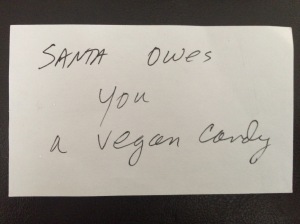 I assured Santa that the IOU was totally not necessary, and on my end I took the time to make a ton of dairy-free Christmas cookies.

But the other things I want, no one else can get for me. If I want to feel reasonably healthy, I am the one who needs to exercise and go to bed on time. If I want to feel sane and calm I am the one who has to reflect and journal and type and prioritize and set boundaries. I get enormous amounts of love and support from my husband and kids and family to make those goals a reality, but they cannot do those things for me. So as Christmas approached my resolution list grew much faster than my gift list. Here are a few:

The things I want most have to come from some action on my part, which is exhausting. But it also makes me realize how much power I have to shape my own life, for better or worse all year long. 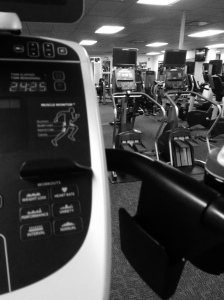 I would like to add an author’s note here.  This post was written before the controversy around 19 Kids and Counting, before we knew that Josh Duggar had victimized his sisters and other young girls, before his hypocrisy in condemning homosexual couples paired with him soliciting extramarital affairs.  I could take this post down, but I still feel a connection to the idea that we sometimes punish ourselves with TV shows and Instagram accounts and celebrity reality shows, taunting ourselves with what we can’t have.  For the record, I did seem to think they were doing a good job raising children and am currently shaking my head realizing that all I knew was an highly edited version of their lives-not what really went on.

I used to watch 19 Kids and Counting each afternoon when I exercised at our local rec center. And by “used to” I mean I watched it daily up until a week ago.

The Duggars kind of fascinate me.

Obviously, their life is very different from mine. Rural Arkansas and its lack of diversity is a different world from the suburbs of Chicago, and as a one-time public school teacher I don’t really agree that homeschooling is the way to go, and I generally wear pants and low-cut tops whenever I feel like it, modesty be damned. Their Christianity doesn’t resemble mine, especially when I mix it with Buddhism or scientific inquiry. Oh, and I have seventeen less children than the Duggars do.

They seem to be good parents. I understand how reality shows can be edited, but from what I can see they instruct their children with patience and love. They seem to be thoughtful about how to foster good relationships and how they instill values like kindness and respect and purpose into their offspring. I quietly cheer them on when I hear more kids or grandkids are on the way. These are people who want children, see them as a blessing and seem to know how to raise them to be decent human beings. I got to see babies and cuddle them vicariously as my own got older and older. I got to see how excited these women were to find themselves pregnant again.

I had to stop watching this show.

Watching it was a way of punishing myself, flooding myself with images of a chapter of my life that is closing. It is unlikely, very unlikely, that I will be having any more babies. Having fibromyalgia is difficult with two fairly independent children; I cannot imagine how much pain I would be in going back to newborn days when sleep deprivation goes on for months and months. And, according to some blood tests, the chance of me even becoming pregnant again is very low- as low as it would be for a woman ten or fifteen years older.

I have been intensely angry at my body, though I hadn’t realized it.

I have quietly and persistently been furious with my body for all of the things it cannot do. I am angry when I can’t play at the playground with my kids or take them to the pool, when at a fun run I am even slower than a three-year-old and a woman who is recovering from surgery, when I can’t stay up late without major consequences. I am furious at what I can’t have: the shoes I can’t wear because they jar my spine, the food I can’t eat because it makes pain run up and down my arms, the plans I have to cancel because I cannot do one more thing.

The babies I can’t have.

Not that I was planning on having more anyways.

Watching the off-the-charts fertility of the Duggars was a super subtle way of admonishing my body, reminding it of its shortcomings. That I watched it while exercising, which I don’t want to do but I have to do every day so I don’t feel even sicker, was the sneakiest way ever to be mean to myself.

It’s a small turning point, one that would be invisible to the people who see me on the elliptical machine every afternoon, but I think it’s an important one. And so far my body seems relieved that the activity I put it through every day isn’t rooted in so much anger and disappointment. It feels happier.

Today’s look “I have a headache so a smile turns into a smirk”
Special occasion wear of my own Christmas Eve at my folks
A new addition to the family in his special occasion wear (One of my youngest’s presents)
Artificial dye-free, gluten-free, dairy-free sugar cookies. We also made (gf, df) whoopie pies, snowballs, vegan fudge, and peanut butter blossoms