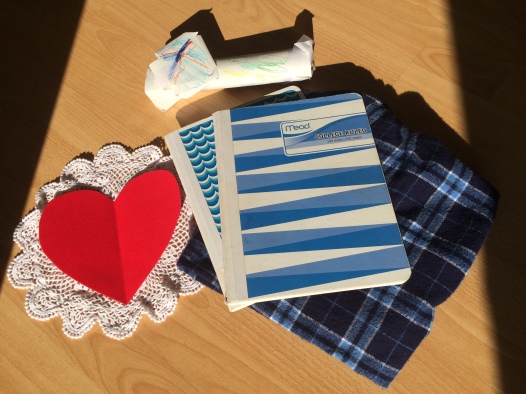 It is time for gifts again, smaller gifts than at Christmas, but it’s time to show our loved ones how much we appreciate having them around.

My younger son is squirreled away in the playroom and has commanded us several times, “Do not come in here.” I know this is his order when he is working on a present for someone and doesn’t want to ruin the surprise. With Valentine’s Day coming up, it is very possible that he has three presents he is working on in there- one for his brother, one for his father and one for me. We get a little nervous when he emerges an hour later and there is smudged ink all over his arms, and a stamp like a tattoo on his right wrist. My husband asks him, “I won’t invade your privacy, but if you look like that, is the room pretty messy, too?”

He tells us he will clean it up, and my older son offers to help, as long as he’s allowed in the room. He is, and the two of them go back and forth with wet paper towels, and assure us that everything is cleaned up. It could be a sketch, or a 3-D paper sculpture of a caterpillar, a comic strip, or a handprint. Last Christmas he made a series of diagrams: instructions, to go with a handful of Legos. He had created a Lego set he and his brother could build together. I was so impressed!

And I am so curious about my gift.

I’m the sort of person who wants to know what a movie is about before I see it. I’ll watch trailers, read think-pieces about how the director felt or what the actors endured, listen to gossip about backstage antics. My husband does not. He wants very much to be surprised. He even gets annoyed when the opening credits to a reality show give away almost everything that is going to happen, yelling, “We’re already watching it! You don’t have to sell us on it! Mute it, and tell me when the opening’s over.”

Sometimes I’m glad he is so strict in his I want to be surprised point of view. A few years ago my oldest son wanted to buy me a Christmas present, and he was confident he had thought up something perfect. My husband was the one to take him shopping, so of course he knew what I had gotten. I pestered my husband a bit, trying to get him to reveal what was bought, because my curiosity had gotten the better of me. This was the first time either of the boys had wanted to buy me something, and that my guy had something specific in mind. I wondered what he thought of me, how well he knew me, what he got me!

My husband put me in my place quickly saying, “I am not going to let you ruin his surprise. He really came up with something perfect, and I want him to get your full reaction as you open it.” That Christmas I opened up two brand-new cardboard-sided notebooks, with blue and white patterns on the front. Exactly the sort of notebook I used for writing in, the same kind I often stockpile since I go through them so quickly. Just the right decoration, and in my favorite color, too. I could not believe how perfect his three dollar present was, and how thoughtful he had been to come up with the idea in the first place. And as an added bonus, my husband got an extra present of me admitting that he had been right.

My husband also got the chance to surprise me with a gift, one I didn’t see coming at all. He was going to be out of town when some important blood test results of mine were going to be coming in. It was going to be emotionally rough, no matter which way they went. If they were positive, I would finally know what was wrong but have to deal with curing a disease – a tumor, or kidney disease, or adrenal failure. If they were negative there would be no big disease to handle, but also no answers as to why I felt horrible. A pair of soft flannel pajamas came in the mail, the perfect way to comfort someone when you can’t physically be there to hold them. A gift that would be appropriate to use in a hospital bed after surgery or to cuddle on the couch researching alternative medicine. It was such a lovely surprise.

So, I won’t peek to see what present is being made in the playroom. All three presents, and the surprise of getting them, make me feel so very loved. And that, I’m pretty sure, is supposed to be the point of gift-giving, and Valentine’s Day, in the first place.

Today’s look “I have a headache so a smile turns into a smirk”
Special occasion wear of my own Christmas Eve at my folks
A new addition to the family in his special occasion wear (One of my youngest’s presents)
Artificial dye-free, gluten-free, dairy-free sugar cookies. We also made (gf, df) whoopie pies, snowballs, vegan fudge, and peanut butter blossoms