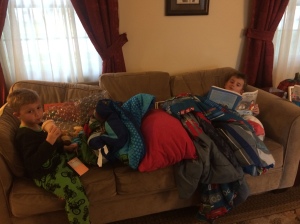 My oldest had a rough day at school last year. He ended up throwing up in a bathroom and was weaving around the hallways when a teacher who knew him noticed he looked green. She guided him to the nurse’s office and asked him how he was feeling.

He replied, “I’m fine,” in a nonchalant and off-handed manner. The teacher was stunned and amused, because he obviously was not fine. When she later told me the story of how this had all played out she felt so bad for him, but also thought it was endearingly funny. I did, too.

My youngest has a swollen cheek right now, and we think it’s from a six-year molar coming in and there being a little infected gum tissue. Yesterday he told me his jaw hurt, and when I asked if it still did today he said, “No.” I asked him if he was sure and his answer was, “If I distract myself it doesn’t hurt. As long as I don’t think about it.”

A bit exasperated I pressed further, “If you think about it, how does it feel?”

I think this is the legacy of having a parent with a chronic illness.

The boys have seen me throw up suddenly and move on with my day. They’ve known times when I was having trouble walking but still stayed with them at the park after school. They know that a lot of the time I don’t feel great, but I cope as well as I can. They say to listen to your body, and I absolutely do, but I have the added dimension that sometimes my body is a straight-up liar. It sends unnecessary pain signals all the time, it tells me I need a nap when really I need to exercise, it tells me I need tons of sugar when that will make me crash harder. So I ignore it. I power through. I tough it out.

The boys have started to do the same. We use the phrase, “It’s not the end of the world,” a lot in our household, that and, “It could always be worse.” We’ve gotten philosophical about pain and illness around here. I think our collective pain tolerance has gone up, unintentionally, and recalibrated. My oldest started out as a toddler who screamed bloody murder at the smallest scrape, and now throws up and claims, “I’m fine.”

But, surprisingly, now my boys also trust me when I tell them that they should probably stay home from school, or see a doctor, or get a flu shot. They used to try to tough everything out, going to soccer practice with a fever or pushing and crying for a playdate when they had been up coughing all night. They don’t do that anymore. It doesn’t seem heroic, it seems like suffering unnecessarily. Maybe they’re just older and wiser. Or maybe it’s because of what they see.

They see me nap, and rest, and exercise, and check my blood sugar, and prepare healthy food. Taking care of yourself when you are really too sick to power through is absolutely normalized. This is life, this is what people do. We push on when life isn’t that bad, when “it could be a lot worse”. When it gets worse we stop and rest and give our bodies a chance to catch up.

Since I have been having such a dysfunctional time of it with my body, I worried that the boys were going to end up with a dysfunctional relationship with their mostly healthy bodies. One day they will be the only ones monitoring the state of their health or illness. They should be off on their own some time ten or fifteen years from now, without a mom to check up on how they really feel. Luckily, I think we are inching towards balance, and I think that is because they have a sick parent, not in spite of it.

D & D campaign the boys put together. After the first hour I am now a level 2 monk!
Ballpoint pen “tattoos” with references
This game is called “Quirkle” and you take turns making rows of either all of the six shapes in the same color or the same shape but all six colors. It was my pick. Today is my youngest’s and both kids have been working on a D & D campaign for today.
The pile of games and puzzles we’ve done has grown