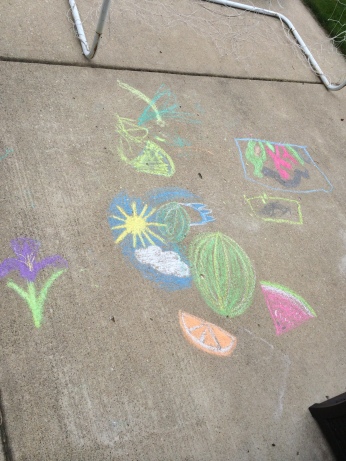 When I was a new mother and had a six-month-old who had begun trying solid foods, some overly concerned women who worked with my husband exclaimed, “She’s home all day and doesn’t make her own baby food?” He relayed that conversation to me with a shrug and support, “You know I don’t care if you make baby food right?” Then he handed me the baby-food cookbooks these women passed to him, to pass on to me and I stared up at him hard. My heart sank so far down. Here was another way I was failing as a mother, how I was wasting hours and giving my baby less than he deserved. Not to my husband, thankfully. Again he said, “I really don’t care one way or the other. They mean well. I brought them home only to shut them up and…well you did like to cook, before.”

I did like to cook before, before I had post-partum depression, before I felt cocooned from the world. The only news from the outside came from women who were preoccupied with how my baby was bottle-fed or how I couldn’t keep my child from mouthing cart handles or how I didn’t steam and puree organic fruits and veggies. But, cooking had always been a way for me to enjoyably fill the hours; sharing a meal with someone I loved made me happy. Maybe I would ignore the books (especially the one which advocated for brewer’s yeast as a snack) and pick some foods that my baby couldn’t get it a jar. I would cook for him.

Pureeing watermelon was an all day project, or else sleep deprivation just made it seem that way. Hacking away the rind, mopping up the pink juices before the ants could find it on the kitchen floor, digging out the food processor and figuring out how to get it put together took too long. Maybe it was the prospect of keeping my baby safely away from sharp objects while entertaining him that may it seem intermitable. Eventually I had a small mound of fuchsia mush I felt somewhat proud of.

My baby took one bite, shot a look up at me that said, “What the hell is this?” and refused to open his mouth again. As I think back now I’m sure the coarse texture paired with an unusually sweet juice startled him and felt wrong. Or perhaps he just knew that this is never what was meant for this poor melon-a spoonful made of loneliness and self-consciousness. I stared at him for a moment before getting up slowly and retrieving Gerber sweet potatoes, which he devoured happily.

I felt just hopeless, because this had failed, because I couldn’t prove to anyone that I was a worthy stay-at-home mother, because I hadn’t saved any watermelon in large juicy crunchy pink triangles for myself. All I had was this slushy, lukewarm pile that not one of us was going to touch. Down the garbage disposal it went.

Today he is seven and a half and just ate about half a watermelon with dinner. I feel vindicated that I hadn’t ruined him for good food. And, I feel extremely angry that I had let some random woman make me feel that I had, that I was not doing enough, that I wasn’t enough because I bought a few, tiny, glass jars once upon a time.

Crabapple tree season! 🌸
New summer pattern for 2022🍋🍊
Just chilling at home this Easter (partially because we’ve all had colds!)